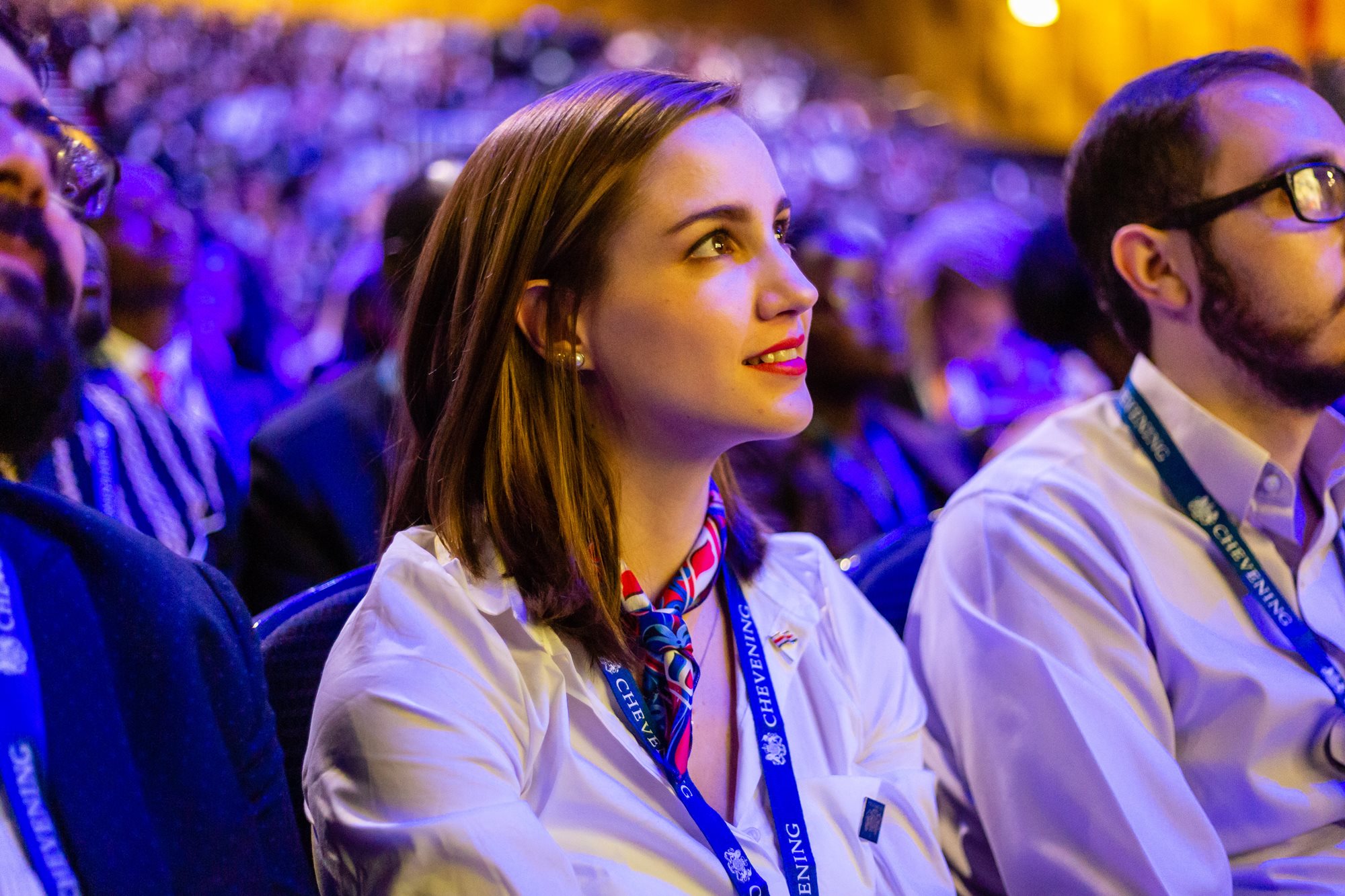 1,800 Chevening Scholars were formally welcomed to the UK at Chevening Orientation 2018, our inaugural scholarship event held in London on Saturday, 20 October.

Orientation heralds the start of the year for scholars studying at universities across the country as the programme enters its 35th anniversary year.

London’s ExCeL centre was filled with colour as scholars from 160 countries and territories arrived wearing traditional dress and waving national flags. Orientation is one of only two times that will see the entire class of 2018 together in the same place. Welcome to the UK

Noeme Santana and Sophie Fenner from the Chevening Secretariat congratulated scholars on being selected from 65,000 applications worldwide. Noeme and Sophie welcomed scholars to the UK, outlined the opportunities available to Cheveners in the coming year, and described how Chevening staff would be able to help them during their time in the country. Ben Coates, Head of the Scholarships Unit at the Foreign and Commonwealth Office, led the FCO introduction, urging scholars to make an impact, build their Chevening network, and create their agenda for the future.

He said: 'You are all here and part of the Chevening family, so make the most of it, and welcome.' At the start of their Chevening journey, scholars heard valuable tips for adjusting to life in the UK from Chevening Alumnus Emmanuel Agbonika, a Nigerian alumnus who studied at the University of Southampton last year.

Agbonika told scholars: ‘Make the most of your mentors and relationships, embrace the culture, but most of all: do not forget to have fun.’ Lord Karan Bilimoria of Chelsea then took to the stage to share inspiring stories from a life of academia and entrepreneurship. Lord Bilimoria is Chancellor of the University of Birmingham, Chairman and Founder of Cobra Beer, and a Crossbench Peer in the House of Lords.

Lord Bilimoria shared some of the secrets of a successful career, and left scholars with one of his mantras for achievement: ‘You’ve got to be confident but not arrogant. You should be humble, but ambitious; you should aim to be “hum-bitious”.’ In between presentations, scholars had the chance to meet with their compatriots from 160 countries and territories around the world for the first time. They also met their point of contact for the year, their programme officer, and took photos on board the centrepiece in the main hall of ExCeL London: a vintage red double-decker London bus. The themes for the rooms were business, economics and finance; climate change, environment and sustainability; defence, security and stability; education, governance and development; engineering and design; international relations and politics; law and human rights; media and communication; public health and medicine; and technology, cyber and artificial intelligence. Thought-provoking question cards were placed around the rooms to provoke discussion. Dandridge said: ‘British universities are profoundly international, reflecting our belief that knowledge knows no boundaries, and that diversity has inherent educational value.’ Sophie and Noeme launched the Chevening Relay for 2018/2019, before Paul Brummell, Head of Soft Power and External Affairs Department at the FCO, brought Orientation’s formal proceedings to a close. He shared examples of Chevening Alumni who are changing the world ‘in a kaleidoscope of ways’.

This inspiring list of extraordinary achievers included Khongorzul Amarsanaa, a Mongolian psychologist who has dedicated her life to eliminating violence against Mongolian women and children; Fatuma Abdulkadir Adan, a Kenyan lawyer and peace ambassador awarded the Stuttgart Peace Prize in 2011; and Carlos Alvarado Quesada, who became the 48th president of Costa Rica earlier this year.